In 1943 military authorities sent unprotected and unsuspecting wharf labourers into a lethal environment. The result was catastrophic: permanent disability and death. This shocking narrative includes accounts of official deceit, intimidation of gassed labourers and denial of natural justice.

Almost 70 years after war stocks of chemical weapons were apparently totally destroyed, mustard gas is still present on the Australian mainland, a fact that cost one man his life.

This meticulously researched book tells the full story of the 1,000,000 chemical weapons imported into Australia in World War II. This remarkable book contains over 300 photographs – many taken surreptitiously – that illustrate all too starkly the conditions and the danger to which these men were exposed. This is an unprecedented visual history. This book is published in association with the Army History Unit and is a volume in the Australian Army History Collection.

Geoff Plunkett is a researcher and historian at the Department of Defence, Australia. He has been researching Australia’s chemical-warfare history for over twenty years and is the author of Chemical Warfare in Australia and Chemical Warfare Agent Sea Dumping off Australia, both published by the Department of Defence. His research has led to the unearthing of hundreds of lethal phosgene bombs at the old chemical-warfare headquarters at Marrangaroo. Other books include Death by Mustard Gas, Let the Bums Burn and The Whiskey Au Go Go Massacre. 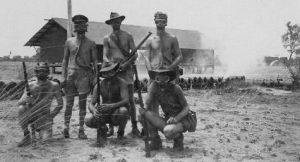 Photo Above:  Royal Australian Air Force Chemical Warfare Armourer ‘sniper’ crew. With 0.303 rifles in hand they are undertaking the disposal operation of 250 lb phosgene bombs at No. 19 Replenishing Centre, Talmoi, Queensland. Phosgene is venting from a bomb middle right and a gas cloud forms.

Below is Richard Fidler’s interview of the Mustard Gas Men